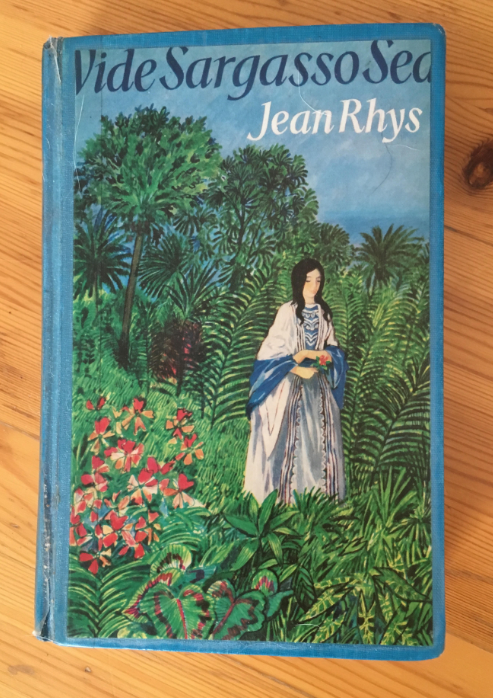 I just realized that I had forgotten to blog about Dominica. I haven’t got a clue how I managed to skip one country. I had read the book, but simply forgot to write about it. Anyway, here we go. I was a bit thorn before I started reading Wide Sargasso Sea by Jean Rhys. It is a highly acclaimed book, and the description of the book is quite often lathered with adjectives. This alone made me wonder why the description has to be written in cliches like “a haunting masterpiece”. The other thing that made me wonder is why a famous author decides to write a book about a character from Jane Eyre. Fan fiction has always puzzled me, and isn’t this actually fan fiction? I can understand that someone admires an author, or some characters in a book, but if you are capable of writing fan fiction, why wouldn’t you write about your own characters and use the story as a basis for their lives instead?

The book is about Antoinette Cosway, the madwoman in the attic. The story takes us to her world, a world where she was sold into marriage, to become the first wife of Mr Rochester. The story takes us back to the days before she “became” Bertha Mason, the mad first wife in the attic. Jean Rhys tries to explain why Bertha became insane. I have to say I am not convinced. Of course whoever can create a backstory to anything and everything, but to be fair, would Charlotte Brontë have written a story like this? Probably not, but we’ll never know.

What I would find interesting is to see two authors write about an event, or life at a mansion, from two different points of view. The point of view regarding the madwoman in the attic would certainly be different. But, to be honest, shouldn’t every single person ever written about seem different, no matter if there are two or twenty books? In this case I am mainly talking about nonfiction. Although, it would be intriguing to give a bunch of writers the main storyline to a book, and see how different the books would turn out to be once finished.

Antoinette is in many ways a lost woman, a woman who does not belong anywhere. She is half European, half European. I think the author understands this quite well, growing up in the Caribbean, and moving to England as a teenager, and moving to Paris as a young adult. The author lived a colourful life, but the feeling of not belonging seemed to stay with her. She turned to alcohol. I have a strong feeling she felt a strong connection with Antoinette Cosway. Just a few examples: they both changed names, were half European and half Caribbean, were unhappy wherever they went, and I guess both were possessed by something.

Quite frankly, I find the author’s life to be of more interest than the background story to one of the characters in one of the greatest English classics. I did not find the book to be such a masterpiece it is acclaimed to be, but I did enjoy reading Jane Eyre back in the days.