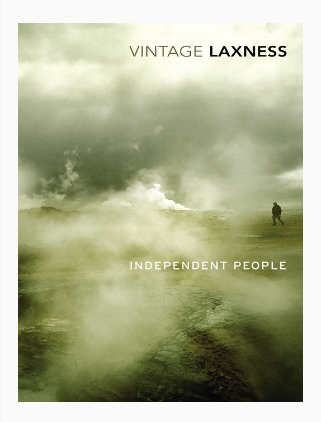 It was great to take on a fellow Nordic country, because it has been a while, and because it’s my own country’s Independence Day today. Happy Birthday Finland, you only turn 100 once! Independent People by Nobel laureate Halldór Laxness is its own was as Icelandic as a book can be. Independent. Strong minds. Harsh weather. Sheep. I definitely ended up reading a different Icelandic book compared to what I have read before (mostly Nordic noir).

Back in the “good old days”, in the beginning of the 20th century, life in Iceland was tremendously different from life today. Icelandic farmers tried to live off their land (with less than desirable plots for farming) after the times of debt bonding was part of the past. The protagonist in the story is Guðbjartur Jónsson, or as he is also known, Bjartur of Summerhouses, a sheep farmer to whom independence is everything.

Bjartur has managed to scrape together enough money for his first payment towards his own farm to his former employer, a bailiff he dislikes more than anyone else. Bjartur’s life is however not all fun and games after he has “become independent”. His new wife is pregnant, but Bjartur is not the father-to-be, and his wife is not happy living at the Summerhouses.

The themes throughout this thick novel are poverty, independence, love, lost love, dreams, misery and harsh conditions. There is one more theme throughout the book that is quite fascinating; the curse and superstition. The land that Bjartur bought was said to be cursed by Kólumkilli, and haunted by a woman called Gunnvör. A curse or not life has not been easy, nor will it ever be for Bjartur. However, Icelandic men are strong vikings, and they can handle pretty much everything, but what does everything entitle? Read the book and find out!

Historical fiction in Iceland has to have its own portion of Icelandic sagas, but as can be seen from the title, independence is what matters the most, and Laxness reminds the reader of it time after time. Independence does not equal happily ever after nor happiness in any other form. Bjartur’s stubbornness makes him a lonely person, and his skills of alienating people are profound.

Brutally honest about the harsh rural life back in the days, when Iceland was not yet on top of the world, shows the real spirit behind humans and our struggle towards something better. Not everyone who is doing well now, or even a nation that is doing well now, has necessarily been the same way for ages. It takes a special strength and willpower to go through everything Bjartur did. He believed in his independence, and because of it he claimed his it, but was independence worth it? Only Bjartur can tell. I admire people who can and make changes due to their beliefs. How else can anything or change?