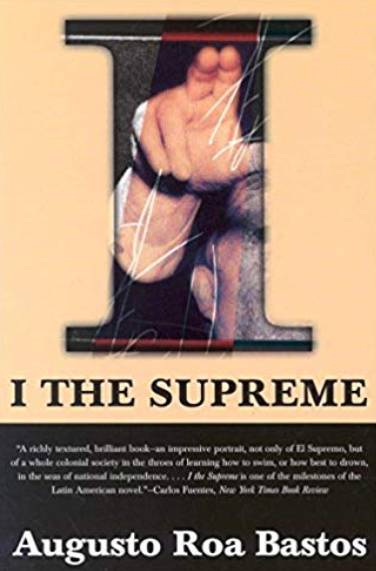 I wanted to find a book about normal people lving their lives in a city or on the countryside in Paraguay, but I was not that lucky. Since I try to avoid magical realism I ended up reading I, the Supreme by Augusto Roa Bastos. It is a historical fiction book about José Gaspar Rodríguez de Francia, a Paraguayan dictator from the nineteent century. He was the first dicator of many in Paraguay. He called himself El Supremo, the Supreme.

The book has two strong themes; power and language and how they work together. An important book in many ways, opening up the mind of a dicatator to the world. According to Francia he didn’t write history, he made it. Paraguay was the first country to claim independence from its colonial father in Europe, which explains why Francia became the first despotic populist in the area. The book focuses on Francia and his secretary, Policarpo Patiño, who suffered a lot of abuse from the Supreme.

In many ways it is an important book. It opens up old wounds that have not been dealt with properly. The book was published in 1974, while Paraguay was still ruled by a dictator. Dictator novels  is an actual genre of Latin American literature, and why wouldn’t it be. Many men have ruled their countries with an iron fist.

“I the Supreme Dictator of the Republic
Order that on the occasion of my death my corpse be beheaded; my head placed on a pike for three days in the Plaza de la República, to which the people are to be summoned by the sounding of a full peal of bells…” That is how the book begins, but keep in mind this is historical fiction.

I find the genre to be extremely interesting, and I am fascinated by hostory and dictatorships work. However, I had a hard time reading this book. I hope it was the translation, because I really wanted to like and enjoy the book. It was written in a way that reading it felt like a chore. Talking about the power of language, it really exists! Could be that my main problem with the book is that the further you read the less logic there is an there is no proper timeline. it is confusing.