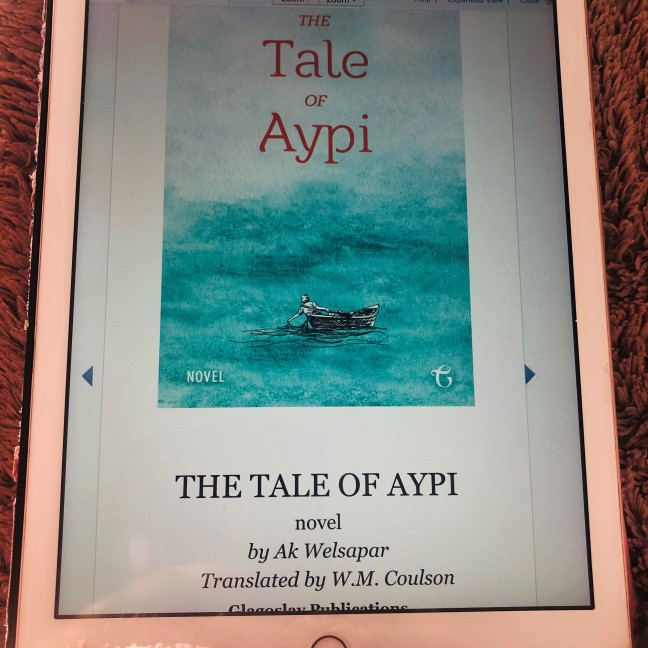 Another country I thought might give me gray hairs trying to find a book I can get. These former Soviet countries seem to have a rich literary history, but as can be expected, not that many books have been translated into the English. I have to be honest and say that even though I prefer reading books from English speaking countries it does bug me that language is such a barrier. It seems like it takes a lot of time and effort to get some authors and books translated. Luckily in this case I found The Tale of Aypi by Ak Welsapar as an e-book on a major worldwide bookseller page.

A typical subject in world literature, and I start feeling like I am repeating myself, but this is a tale about some fishermen I a small village that are fighting against the mighty Soviet regime. The regime wants them out of the village, but the men are not willing to leave. They turn to the tale of Aypi, a tale about a young woman who was killed years and years ago. The men are willing to fight for they way of life, their beliefs, and their ancestry.

As can be expected, Welsapar’s writings are banned in his native land of Turkmenistan. This particular story takes place during the Soviet years but could easily have happened after independence as well. In fact, not only is Welsapar’s writings banned, he has been declared public enemy of the country. The pen really is mightier than the sword.

The strength of this book is that there is a lot of conversation going on, and the reader gets familiar with what the characters feel and think. It is not a dragged out, endless story written about a place and its people, instead an engaging tale straight from the mouth of the inhabitants. The weakness is the structure of the book, because the dialogues ate quite long, and repetition is apparently part of the charm. The many metaphors used in the book gives it a rich angle to an otherwise universal fight between good and evil, tradition and modern, and bringing change to people and places where change is not appreciated.