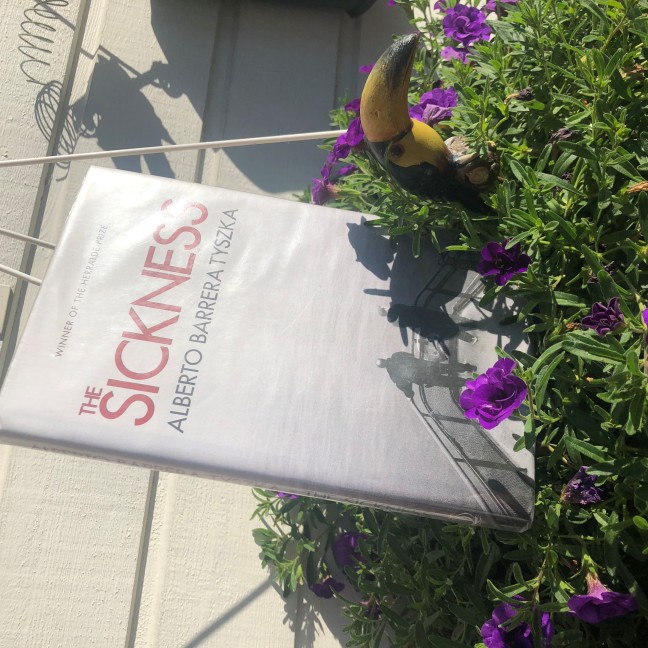 I would have expected to find a lot of books from Venezuela, but that was not the case. After looking up books online I quite easily found The Sickness by Alberto Barrera Tyszka, so I bought it. No other reason behind it really. Although, it is most definitely a different kind of book from what I’ve read this far, especially for Latin America. I was happy to find a book that is not magical realism.

Dr. Miranda knows something he doesn’t want to know, nor does he want to tell anyone about it. His father has cancer, and he only has a few weeks to live. He also has a patient who thinks he is dying. His wife died, and after that he has found many things wrong with himself. Miranda’s secretary feels sorry for him, despite that she knows he’s a hypochondriac. Until now Dr. Miranda has never had a problem telling his patients the truth.

It is a difficult subject, but a subject we all have to deal with, and most of us has to deal with it many times. It is amazing how much thought and reflection can be put into just 150 pages. Such a hard subject to tackle, but then again, people has to face the truth, and sometimes it has to be done in a blink of an eye. “Blood is a terrible gossip, it tells everything” is a good way of putting it.

Sickness has an effect on all of us, but we react to it in many different ways. Terminal illness does not look at age, gender, wealth, or any other earthly thing for that matter. It is not easy to read about the subject either, but this book was not as hard of a read I thought it would be. Heartbreaking at parts, philosophical at others, thoroughly human. If you are looking for a bit of a different book compared to mainstream literature, and the subject appeals to you, you should definitely give it a go.